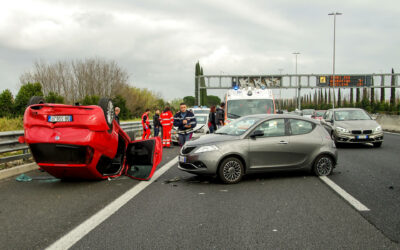 The act of driving requires a lot of concentration, which is why a distraction can potentially cause a lot of problems that could result in an accident. There are many forms of distractions that a driver can engage in, but one of the worst is texting while driving. Texting while driving is usually thought to be a problem with younger drivers, but drivers of any age group can engage in this behavior. It is a problem when they do because texting and driving is one of the most dangerous kinds of driving distractions, and it has a high chance of leading to an accident.

If a driver causes an accident because they were texting while driving, then the other driver involved deserves to be compensated for any expenses caused by the accident. The best way of getting that compensation is by hiring a personal injury lawyer to represent them. At Kirakosian Law, we have been helping numerous Los Angeles residents with their car accident cases for years now, so we have the experience and expertise you need to help you with your case.

Kirakosian Law can help you with every aspect of your case, from helping you file your injury claim all the way to negotiating with the insurance company of the at-fault party to make sure that they offer you a fair settlement. It can be tricky to prove that someone was texting and driving when they got into an accident, but we can help you prove the culpability of the at-fault driver. So if you were in a car accident that was caused by a texting driver, then contact Kirakosian Law to get a free evaluation of your case.

The Dangers of Texting While Driving

The types of distractions in which a driver can engage can be divided into the following three categories:

Visual Distractions – These are the kinds of distractions that take the driver’s eyes off the road.

Manual Distractions – These kinds of distractions cause drivers to take their hands off the steering wheel.

Cognitive Distractions – These distractions take the driver’s mind and concentration from off the task of driving.

The reason why texting and driving is so dangerous is that it is a combination of all three kinds of distraction, which can be extremely dangerous. When a driver texts while they are driving, they take a hand off the wheel to interact with their phone, they take their eyes off the road to look at their phone, and they take their mind off the task of driving because they are typing out a message on their phone. The combination of those three distractions can create a dangerous situation that could result in disaster.

How To Prove That Someone Was Texting While Driving

In most cases, it can be easy to prove that a driver was negligent when they caused a car accident. It can be relatively easy to tell when a driver is drunk, or when they were speeding, or when they were driving aggressively. However, it can be a little more difficult to prove that a driver was texting when they caused an accident. It can be difficult, but it is not impossible. You will need the help of a personal injury attorney because they will be able to get access to evidence that a regular person cannot.

One of the ways a personal injury attorney can prove that a person was texting when they got into an accident is by accessing their call detail records. They can check the driver’s phone to find out if they sent a message at around the time that the accident occurred. Even if the phone was damaged, experts can still retrieve that data. But if the phone was completely destroyed, then your attorney can contact the driver’s phone company to attain records of the driver’s communication history. They can find out whether the driver was receiving or sending texts when the accident occurred, or even if they were using the phone or not.

Texting and driving is incredibly dangerous behaviour, which is why anyone who was in an accident that was caused by a texting driver deserves to be compensated for the expenses caused by the accident. However, it can be difficult to prove that someone was texting while driving, which is why the accident victim should contact Kirakosian Law to help them. We can help our clients by gathering the evidence that proves the other driver was texting when they should have been concentrating on driving.

We can also make sure that the settlement offered by their insurance company is enough to cover all of the expenses caused by the accident. That includes your medical bills, repair bills, lost wages, pain and suffering, and more. So if you were in an accident in Los Angeles that was caused by a driver who was texting while driving, then contact Kirakosian Law for a free case evaluation so that we can give you the help that you need.