SNL star Maya Rudolph was visibly upset after smashing her Tesla into a tree in Los Angeles recently. Pop Culture claims that the TV and Movie actress was on the scene of the accident looking deeply impacted by the car crash.

It’s uncertain whether Rudolph was the cause of the accident, or if she was employing the vehicle’s infamous autopilot feature at the time. However, paparazzi photographs taken at the scene show Rudolph in what seemed like a state of shock. Despite it appearing to be a minor accident, we very well know that even minor accidents end up with settlements and in courts as vehicle, even with minor fender benders, can cause damage to a person’s neck or spine or more.

In one picture, Rudolph is seen placing her hand to her heart. Neighbors in the area came out to assist with neighbors gathering outside of their homes to lend a hand. After a neighbor brought her a chair to sit and make calls, she was given a water bottle to relax a little.

The front end of Rudolph’s automobile had obvious damage. The steering wheel’s primary airbag and the secondary airbags from the falcon-wing doors were deployed following the accident. Her black Tesla’s hood was bent against a tree she slammed into after the collision.

She was escorted to an awaiting vehicle which pulled up alongside the Tesla. After she got out of her car a friend came to collect her. Before departing in her companion’s Toyota, Rudolph and her friend were seen removing personal items from the crashed Tesla. It is uncertain if police or other medical personnel arrived to assist after the

Tesla car accidents statistics are increasing in the United States by the day along with every other type of car. These statistics are not limited to any particular region or region of the country but happen everywhere to both men and women. Therefore, it is important to make sure that all drivers in the USA take care when they are behind the wheel and that they exercise due diligence and care when they get into their cars, trucks, buses or other such vehicles.

Car accidents are increasing at an alarming rate due to drivers becoming too engrossed in their phones and not paying attention to the road. Tesla’s autopilot system is considered to be state-of-the-art but it or any other system like it is not immune to errors or a guarantee to avoid a car accident in Los Angeles or anywhere else. According to Tesla themselves, they “registered one accident for every 2.05 million miles driven” with autopilot off and with autopilot on about 1 in 978,000. It’s improving but it isn’t going to be perfect any time soon. 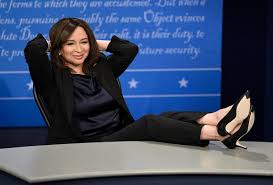 Rudolph has yet to discuss about the accident on Instagram or any other socials. Thursday, Jan. 6 was the date of the accident, according to reports.

Rudolph is mostly known for her work on the late-night sketch comedy show as well as many other movies. She’s also the daughter of Minnie Rippleton who passed when she was very young.